Final NaPoWriMo prompt! And it is to translate a poem, but unfortunately there is no otter literature, so I have had to listen to the varied vocalisations of the giant otter and then make up some complete nonsense again. Giant otters have twenty-two distinct sounds, probably because they live in the largest and most complex social groups. They are also very stressed out by being in close proximity with humans. 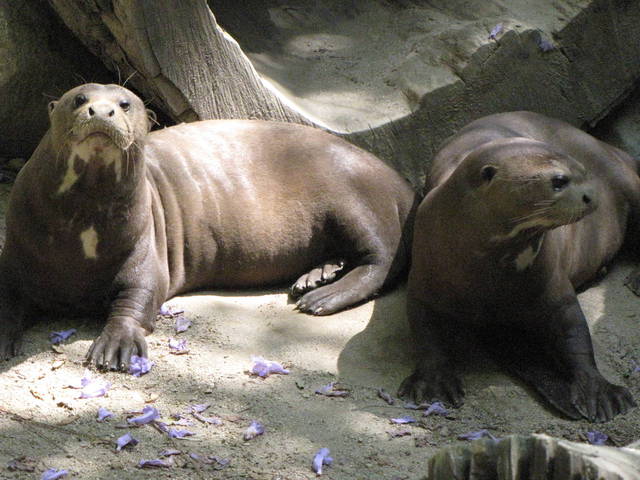 I may not have lived among giant otters, but I have shared flats

with people I can barely tolerate. Their hastily-chosen, temporary

sexmates, on catching sight in a doorcrack of my solitary moshing,

have given just that strangled yip of laughter that would garner

a small dead fish from an alpha otter momma.

of the diurnal trapped among nocturnal experimental loop-pedallers,

as far afield as Lake Salvador.

I have nursed beers on window seats whilst macaw-hoarse flirters

their own drinks and then exit the yikkering, yipchuckling hodgepodge

to find a place to ‘be alone’. Through my wall I heard them,

And yes, I have felt that wavering scream of isolation threaten

to come sailing out like a violin bow dragged ragged on a saw-edge,

though  I have been habitually considerate and kept the noise down,

at most emitted a pup-squeak like a balloon-dog having its neck rung,

but no otter ever answered.

One thought on “Human/Otter Dictionary”