You’ve heard this one, right? Once upon a time, there was a goddess called Demeter. Her power ripened corn, and brought the fruit to sweetness. But when her only daughter was abducted and taken to Hades, she went mad with grief. She wandered the world, searching for Persephone, and the world descended into perpetual winter.

Poets write based on Greek myths a lot. I have a poem in Under The Radar magazine issue 23 based on the Demeter/Persephone myth, and I thought I’d tell you how I came to write it – by doing to myself just what I did with Rose Condo in my last blog.

On a bitterly cold day in January 2015, I created a ‘Demeter body’. I asked myself – 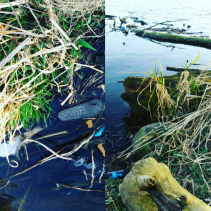 What if she searched as far as Hartlepool?

How would she move?

I imagined a muttering, distraught homeless woman, ingrained with grime, constantly scanning the gutter-edges of towns for a trace of her daughter, neck hunched forward, arms compulsively reaching out, quivering with painful hope at every child.

I got into character and went on a very long walk through the frozen streets. “Listen with your feet, the shadows are all ice” 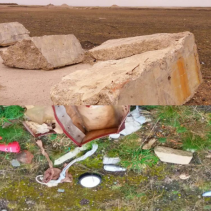 I hunched myself, crunched my neck, and limped through some of the most neglected parts of Hartlepool Headland, down the walkway where “the old coal rail / is tarmacked and sequinned with broken fifths of scotch” and into town.

I walked through housing estates I’d never visited before. “Black dog on Vincent Street, slaver on its jowls”

I was astonished by the screams coming from playtime at the local schools. “Rosy little children / breathing out steam like rotting compost” 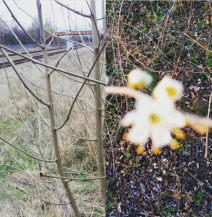 I even pushed through a damaged fence to search in the scrub near the railway, because by then the body was telling me that Demeter absolutely needed to check everywhere. Every dirty corner where the lost and trashed accumulate.

I lived, trusted and followed Demeter’s body for about four hours. When I came home, I was aching and exhausted, but I had a poem that seemed to have discovered a new voice. 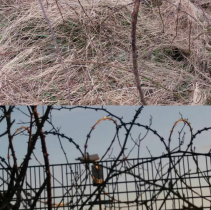 The photographs featured here are composite images created from shots I took on my phone during my walk. They are my attempt to find a visual equivalent for the emotional atmosphere of the poem.