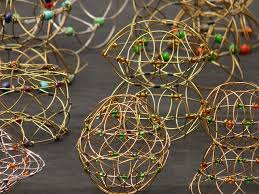 Do you remember those wire puzzles? The ones with all the beads at the joints, that you could push through themselves, squeezing and weaving and warping them into spheres and orbitals, bracelets and columns? That’s what it was like watching the characters in Be Brave And Leave For The Unknown at ARC last night.

In the centre of the stage there is a large table, with cunning extra functions – flaps lift, lids uncover holes, objects emerge from the hollow interior. It becomes a piano, a baby bath, a tank, a bar to dance on, a train platform to jump from, a bomb shelter. The actors thread themselves around and under and through it, and around and about one another, in a beautiful cat’s cradle of intention and interplay, constantly making and undoing and re-making their worlds.

Will Dickie plays Chris, a concert pianist with extraordinarily expressive fingers and a bad case of stage fright. Philippa Hambly plays Fleur, a war photographer adrenaline junkie who can’t sit still. We see them meet, fall in love, become a family. Then we see them fall apart under the strain of the worst tragedy that can happen to new parents. The bravery they have had to use on a daily basis to overcome the fears inherent in their professions is not sufficient to see them through – they must discover a different order of courage within themselves as individuals, and as a couple.

For me, what was most interesting was the relative absence of dialogue. This is an incredibly visual piece, made completely effective by coherent lighting and sound design. I recently saw Into Thin Air by Precious Cargo, and had been expecting this kind of physical image-painting, but on that occasion I was disappointed – the play is beautifully written by Allison Davies, but had failed to take life in the bodies of the actors. It occurs to me now, having seen Be Brave, that the key is to leave enough space in the writing for the enactment to happen (if that makes sense). The text of Into Thin Air could exist by itself as a short story, but Be Brave is absolutely a piece of theatre, reliant on the presence of actors, the story entirely expressed through their actions.

Oh, and best ever use of a glass of water. Stunning bit of visual metaphor. It’s on again tonight at ARC, and continues to tour venues in the north east through the REACH programme for new writing for theatre. You should go.