Does anyone actually enjoy failing? In my first blog about my writing residency at MIMA, I said I was going to experiment with a really wide range of techniques, and fail as interestingly as possible. But of course, I secretly hoped that everything I touched would turn to gold.

Readers, it did not.

I’ve shown you some of what I feel are the better pieces to come out of the residency so far – now here are a couple of bits I’ve binned.

The power of this African life, this free life, crosses history

I’m happy enough with the content of this blackout poem, but as an object it is ugly and dull- it actually looks much better in photographs than it does in real life, thanks to the miracle of editing tools. 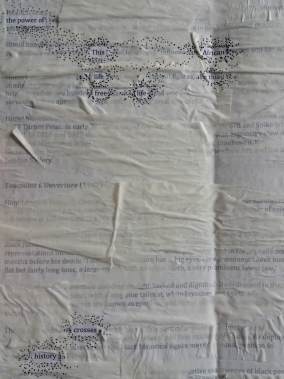 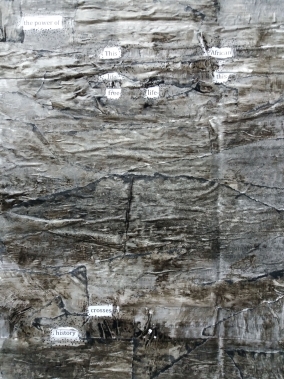 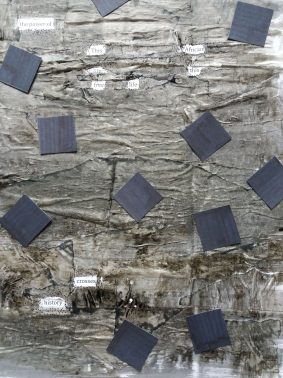 I tried first to erase text using a stippling technique, then when that didn’t work I covered over text with masking tape.

That was a really revolting mess of a white-out, so I started painting the masking tape with black ink, hoping for a sort of stormy sea effect. It dried and took on a patchwork leather effect, which looks like a mistake on this crappy bit of cardboard. I used some of the blackout squares from a previous film to try to create more interest. Meh.

Can it be turned around? I think the only thing that might work is if I were to apply this technique to a human figure or silhouette. Then it might be possible to think in terms of the literal scars of slavery, or dreadful stories about the use of human hides. Then the leathery, bandaged surface might become something powerful and moving. Am I the right person to do this? I think not. But that is what the final texture of the piece brought to my mind. If I were to do this with an anonymous human form, it would be an exercise in objectification. Himid’s life-sized figure works because he is named, reclaimed, celebrated in all his individual glory.

This second piece is a more convention blackout poem, using felt-tip pen. I was experimenting with a non-linear, non-grammatical construction. Basically a sort of mind-map springing out of the central phrase “questions of migration”. It’s  too random a cloud of words, requiring too much interpretation by the reader to have much of an impact. 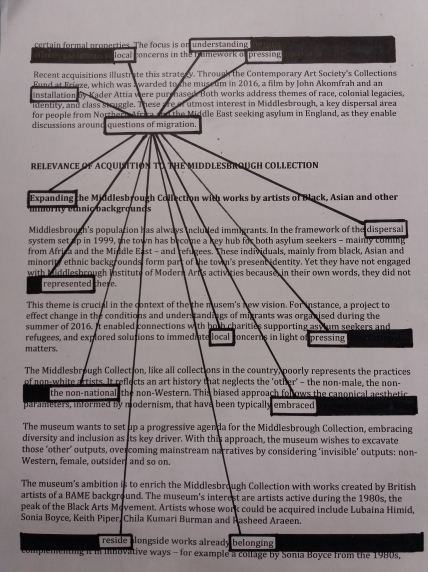 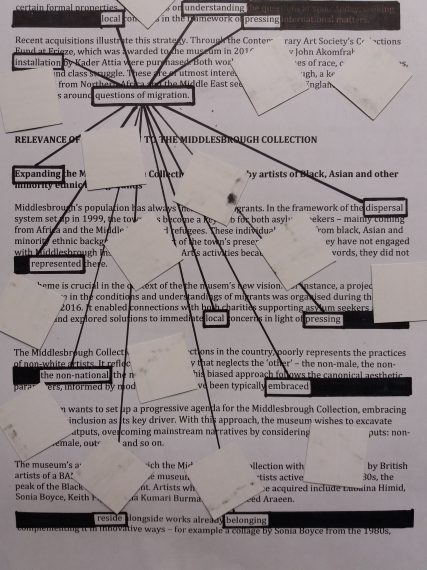 So – there you have it, I have managed to fail as promised, though maybe not as interestingly as I would like. Not yet, anyway! Onwards! The next phase of the residency is inspired by Brazilian artist Brigida Baltar, and I’m still working on the written aspect. I’ll be back once I have some visuals for you! Plus, watch out for some writing prompts coming your way…

2 thoughts on “Better Ways To Fail”